To share your memory on the wall of Johnnie Youngblood, sign in using one of the following options:

Print
Johnnie Youngblood Sr. was born February 26, 1966, in Monroe, Louisiana to his proud mother, Cathy Ann Youngblood. He was the eldest of four boys. Due to his mother being of such a young age, Johnnie’s Aunt Claudia nurtured and cared for him mostly. He became the family’s baby. Growing very close to his cousins, especially, Rosemary, who is Aunt Claudia’s oldest. Rosemary believed she had two brothers, Johnnie and cousin Arnold, Rosemary’s brother who were months apart. Johnnie was positively influenced by his grandfather. Lonnie Youngblood, a single father raising 7 children, after the passing of their mother, Savannah. With help from his uncles, the family relocated to Duarte, CA in 1969.

In 1971, his mom relocated to Las Vegas, NV along with his stepfather, Johnny Porter. In 1973, Cathy and the boys moved back to California, and lived with her sister, Connie. Johnnie and his cousin, Sue who is Aunt Connie’s daughter, grew very close. With their birthdays being within days of each other, they celebrated together up until their adulthood no matter where they resided. As their mother worked, their grandfather, Lonnie, taught the boys the importance of taking care of one another. Johnnie and his brothers grew close, sharing everything. They even had memories and kept secrets that were a surprise to their mother. Johnnie was raised and nurtured in the church. He attended Sunday School, YPWW (Youth Services). His greatest and worse childhood memory was when his cousin, Rosemary always wanted to play church in her mother’s garage. All Johnnie wanted to do was be regular child, while Rosemary wanted to shout and praise the Lord, mimicking the adults. Nonetheless, he knew and loved God from a very young age. This close-knitted family stuck together. Johnnie would go to Oakland and spend summers with his cousins, the Palmers. He looked forward to their annual family gatherings and camping trips.

Johnnie was very intelligent, and an avid reader. In his spare time, he would read the Guinness World Book of Records. He would flaunt his knowledge and quoted facts. Johnnie was a sports enthusiast. He played sports from the age of five until his coaching days. In high School, he had the honor of playing football, basketball, and running track with his brothers and cousins. Johnnie and his brothers were the stars of the “Youngblood & Porter” house. As they ran track in community youth leagues, they successfully won 12 medals and ribbons in one day, as his female cousins cheered on. It was difficult to distinguish cousin from sibling because they were all so very close. In their adulthood, they all earned trophies and exhibit their great athletic skills. Johnnie attended schools in the city of Monrovia and Duarte, CA. He graduated in 1984, from Duarte High school. He went on to further his education at Citrus College, where he majored in Communications and broadcasting. As most youth, unsure of their future goals, Johnnie began working with his uncles: Roosevelt, Leon, and Coy Youngblood. He gained experience, expanding his mechanical skills and knowledge of diesel engines. Johnnie was also an auto enthusiast. He purchased a Karmann Ghia with Porsche alloy Rims. Then with the assistance from his uncles, he refurbished a Volkswagen Bug, Ford Mustang ,and 68’ Chevy Caprice to pristine condition. His favorite past time was supporting his uncle and cousin, Leon Jr. who drag raced. He loved the races. Eager to be successful like his uncles, he became an entrepreneur starting his own pressure washing and truck washing company. Johnnie also exceled in sales. He managed to sell roof shingles faster than they could get them up. He was always a great communicator and negotiator. Hence his success, working at Robinson May Company, He received numerous accolades and bonuses doing collections.

In 1995, he met Denise Carcamo. Working together, they built a great friendship. As they both navigated through a divorce, they became each other’s support system. One day, Denise in support of her children sold chocolates for them to win a trip to Disneyland. Johnnie, in knowing this, promised to purchase all 4 cases of chocolates. All he asked for in return was a date. On November 6, 1995, Johnnie received his date. Where he finally met Denise’s children Edwin and Malaysia who nicknamed him “Johnnie Quest”. This friendship grew into a loving relationship. Soon after, he furthered his career in Household Finance. Where he was awarded top collector over the U.S., and received an all-expense paid trip to Disneyworld. This led to a Collections Manager position. On November 6,1997, Johnnie and Denise moved to San Bernardino, CA and were blessed with Johnnie’s first child, Jordan. In 2000, they moved to Fontana, CA where his youngest child, Johnnie Youngblood, Jr. was born. Johnnie loved children. He was
not just an uncle but more of a father to a host of nieces, nephews, and God children. With the success of his mobile truck wash and paving company, they purchased their first home in Hesperia, CA.

On February 14, 2004, Johnnie and Denise were married. They decided to relocate to Las Vegas in July 2005. Johnnie began his career in construction. In addition, he held many positions while living in Las Vegas; such as working as a certified gas pipe installer with Southwest Gas Company, a water and end dump truck driver, a manager at Walmart, and an officer at The Orleans.

People that knew Johnnie, knew he spoke passionately about sports and politics. He never debated anything he didn’t know anything about. He was a die-hard Rams, Lakers, and Dodger fan. Johnnie and his wife Denise made sure their family dedicated time to serving God. Whenever family came to town, Johnnie Jr. aka {Noonie} would make sure everyone attended church Sunday morning. Along, with working and coaching, Johnnie was an avid traveler. He enjoyed camping in South Dakota, and Colorado. He’s been on 19 cruises (Mexico, and Caribbean). Most memorable was Aruba, and Hawaii. Just as long as he was with his family; he was happy.

He bragged about his wife and kids to Anyone and everyone, that would listen or not. His wife never let him submit to his illness. On January 19, 2021, Johnnie transitioned from this life to be with the Lord. Proceeding in death was his grandfather, Lonnie Youngblood, grandmother, Savannah Youngblood, his sister, Angel Rochelle Porter, his stepfather, Lewie Valentine Sr, and his uncles: Coy Youngblood, Leon Youngblood, and Sylvester Youngblood.

Everywhere Johnnie went no one was a stranger. He spoke to everyone! Additionally, he made a joke until you smiled. And for that he will be greatly missed for the love he had for strangers, his friends, and family.


To send flowers to the family or plant a tree in memory of Johnnie Youngblood Sr., please visit our Heartfelt Sympathies Store.

We encourage you to share your most beloved memories of Johnnie here, so that the family and other loved ones can always see it. You can upload cherished photographs, or share your favorite stories, and can even comment on those shared by others.

Janice McGary and Family sent flowers to the family of Johnnie Youngblood Sr.
Show you care by sending flowers

Posted Feb 06, 2021 at 03:25pm
I will miss you Johnnie! Thank you, for keeping my little sister happy and showing her what LOVE is.

Posted Feb 04, 2021 at 08:25am
Family, my thoughts and prayers are with you. Praying God will comfort and strengthen you today and the days to come. Love you,

Posted Jan 31, 2021 at 11:08am
Thank you Bro for the talks & the laughs. The last time we spoke I said to you that God Got You and I'm Praying for YOU!! You said to me Sis "I'm going to FIGHT until I can't FIGHT no more!! Well my "GOOD & FAITHFUL SERVANT" You "DON'T HAVE TO FIGHT" anymore because "GOD GOT YOU"!! I LOVE YOU BRO❤️❤️❤️
Comment Share
Share via:

Posted Jan 27, 2021 at 07:47pm
Ive known Johnnie since 1982 when we used to hang at Columbia Bowl and get our swerve on, he was pretty good in track and always was ready for a debate. He had a kind heart when he wasn't talking smack to you, lol. Overall he was a mans man, good conversationalist and over all good person. Gonna miss you but never forget you,
Comment Share
Share via: 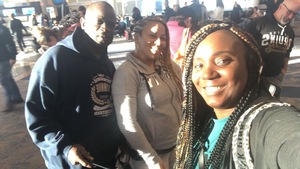