To share your memory on the wall of John Bridgeforth, sign in using one of the following options:

Print
John Bridgeforth was an extraordinary husband, father, brother, son, friend, and human being. He was a man of integrity who always put family first. John was a thoughtful of those around him through his actions.

John was a man of few words, but when he spoke you knew he had something of importance to say. He didn’t judge those around him but made room for all different kinds of people.

John Bridgeforth served his country in the Air Force for 20 years. He was in the communications division. Before he retired from the Air Force he began to work for the Nevada Power Company where he met the love of his life, Brenda Bridgeforth.

They were married for 39 years and raised 3 great kids. He eventually retired from the Air Force and began employment with The Las Vegas Valley Water District for 24 years. He was then able to retire from working for good and slid right into retirement. He again dedicated his time to his family and various hobbies of interest. He spent some time playing golf with friends and joined a bowling league. He was competitive but never took his hobbies too seriously.

John Bridgeforth you will forever be remembered for the love had for yor family and friends.


To send flowers to the family or plant a tree in memory of John Bridgeforth, please visit our Heartfelt Sympathies Store.

We encourage you to share your most beloved memories of John here, so that the family and other loved ones can always see it. You can upload cherished photographs, or share your favorite stories, and can even comment on those shared by others.

William M Washington, Christine Myers, and other have sent flowers to the family of John Bridgeforth.
Show you care by sending flowers

Posted Feb 14, 2021 at 10:03pm
Family, the planting of these trees is a symbolic gesture that the spirit of John lives forever in our hearts and blessings to our environment .

3 trees were planted in the memory of John Bridgeforth

Posted Feb 12, 2021 at 01:23pm
Thank you for touching our lives the way that you did. Your presence is felt. We know you are still with us. We will always take it slow, JB.

3 trees were planted in the memory of John Bridgeforth

Posted Mar 04, 2021 at 06:56pm
Like the memories that I have of John this living memorial will live on. Goodbye my brother, I will see you again.

Posted Feb 16, 2021 at 01:45am
Cousin Brenda, may you and your family find comfort in knowing you are not alone, you are surrounded by Almighty God and those who care for you. We hold you close in our thoughts as we lift everyone up in prayer.

We are so thankful to have shared memories with Cousin John, especially at the family reunions. He touched many us and we will miss him and his impact on our family. Much Love and Blessings.

Posted Feb 15, 2021 at 05:09pm
Uncle John you will be missed so much. I thank God for having you in my life & always giving our family love. Your stories and memories will always make me smile. My heartfelt condolences go out the families. Until we see one another again. Love you 💜
Comment Share
Share via: 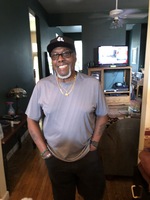